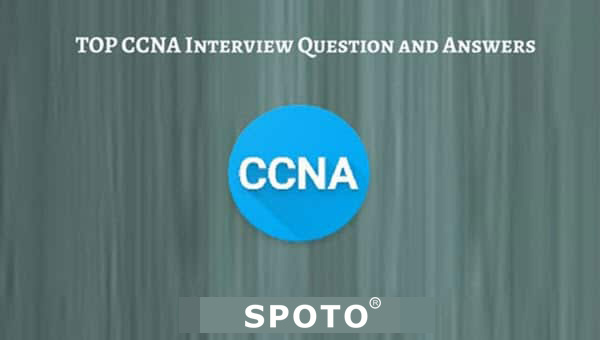 Given below is the list of frequently asked top 20 CCNA interview questions and answers.

These questions would help both the fresher as well as experienced candidates in the interview preparation process.

Networking is used to connect or operate with a network. It is the process of creating and using wired or wireless networks for exchanging information, ideas, files, and other electronic communication.

2. What does Protocol mean?

The protocol is defined as the rules that connect two or more devices to transfer the information from one device to another. It helps to know how data is being transferred from one network to another network for communication.

3. What is the OSI reference model?

OSI is a reference model that tells how information and data are communicated over a network. It is a conceptual framework that understands the relationships of transmission.

4. What are the different layers of the OSI model?

5. What is a Switch and why we are using Switches?

The switch is used to receive the signal to create a frame. It forwards the packets between various LAN segments. It supports packet control when the data is sent to the Data Link layer or Network layer of the OSI model.

While sending packets, a signal gets enabled and gets accessed by reading the destination address and forwards the frame to the appropriate frame, hence we use switches.

Ans: Routing is the process to find the path on which the information or data can pass from the source to its destination. The device by which routing is done is called Routers.

7. What is the difference between Switch, Routers, and Hub?

A Switch is used to receive the signal to create a frame. It forwards the packets between various LAN segments. It is the platform for packet control when the data is sent at a Data Link layer or Network layer of the OSI model. It supports a single broadcast domain and multiple collision domains.

The router is a networking gateway device that is used to forward data packets to the computer networks. A router is connected by at least a single LAN with its IP address or with LAN or WAN. A router supports two broadcast domains.

In the hub, if anything comes in its port then it sends it out to the others. It is less expensive and the least complicated. It has a single collision domain and a single broadcast domain.

Internet Protocol (IP Address) is a 32-bits to 128-bits identifier for a device on TCP/IP protocol. The IP address of a device must be uniquely defined for communication.

It has 2 principal functions which include host and location address. And it has two versions which are IPv4 (32-bits) and IPv6 (128-bits).

9.how many ways can data be transferred in CCNA?

Data can be transferred in 3 ways:

10. What are the different types of network in CCNA?

There are two types of network:

It is the subdivision of an IP address which is divided into two parts such as the network prefix and the host identifier.

PING is packet Internet groper. It is used to test the reachability of a host on an Internet protocol (IP) network. When any data is sent via the network through the IP addresses, then it will PING the receiver to receive the data from the sender.

14. What are the different class and ranges of IP address?

There are 5 different classes of IP address:

Private IP is used within the local LAN. Public IP is used across the Internet.

It is an arrangement of elements in a specific order.

The various types of Topology include:

18. What are the different types of passwords that you can use in Cisco routers?

19. When does network congestion occur?

network congestion occurs when too many users are trying to use the same bandwidth. This is especially true in big networks that do not resort to network segmentation.

20. How does RIP differ from IGRP?

RIP relies on the number of hops in order to determine the best route to a network. On the other hand, IGRP takes consideration of many factors before it decides the best route to take, such as bandwidth, reliability, MTU and hop count.

If you want to pass your Cisco CCNA exam, you can try SPOTO Cisco CCNA practice tests. Practice makes perfect.

2. CCIE Syllabus and Study Tips to Help You Pass Exam in the First Try

3. How Much Would It Cost To Become A CCIE?

4. Top 5 IT Certification for Networking Engineers 2019

5. Is There Any Prerequisite for CCIE Certification?